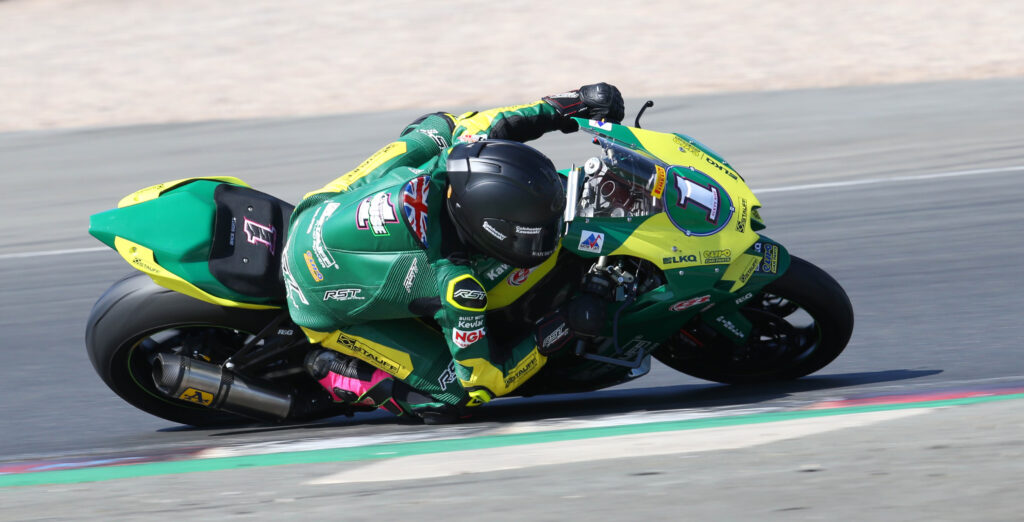 REIGNING Pirelli National Superstock champion Chrissy Rouse will get his title defence underway this weekend when the 2021 season kicks-off at Oulton Park.

The Geordie maths teacher and podcast host has put his regular ‘69’ number to one side this year as he proudly runs the coveted number one plate when the action kicks-off at the Cheshire track on Friday.

Rouse, who clinched the title at the final round at Brands Hatch last October, has returned to Kawasaki power this season and will contest the hard-fought series aboard the GR Motosport ZX-10RR.

After an extensive pre-season test schedule which has included all the official Bennetts British Superbike Championship tests along with a handful of club races, Rouse is ready to come out fighting when free practice begins on Friday morning.

“I’m really excited for the new season to start, Oulton Park is one of the best circuits on the calendar in my view, so it’s the perfect place to start our championship defence,” he said.

“Because of the delayed start, it feels like it’s taken such a long time to get here but as soon as we start we are absolutely flat-out until October.

“I’ve been very happy with how the pre-season has gone on the new Kawasaki with the GR Motosport team. Although I may not have been topping the timing sheets, I’ve been working hard to get comfortable on the bike and at each track I’ve been somewhere near.

“The only thing that’s a little disappointing is that there are limited numbers of fans allowed to attend this weekend, but this is out of everyone’s control and it will still be nice to see some people trackside.

“I’m incredibly excited about getting stuck in and getting some good points on the board to get my championship defence off to a good start.”

The 2021 championship will be contested across 11 rounds at some of the UK’s leading racing circuits. Some race events will include two races, but this weekend will feature one at 2.30pm this Sunday, June 27, following free practice on Friday and qualifying on Saturday.